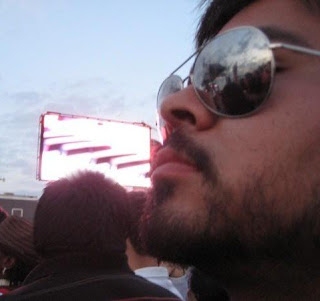 In his own words: "I am a music journalist. I recently graduated from UTEP with a bachelor’s degree in print media. While attending school, I worked at the Prospector, UTEP’s campus newspaper. I began there as a lowly correspondent and worked my way up to reporter and entertainment editor.

At the Prospector, I learned many things about media reporting (always write previews if you want to cover something!) and the opportunity provided me a much appreciated spring board for my burgeoning career as a music writer.. With the Prospector I began covering fests in Austin, including Austin City Limits '08 and Fun Fun Fun Fest of the same year. After I graduated, I contributed stories to Newspapertree.com, including coverage of last year’s SXSW. I launched my own online only publication in June. It is called EP Culture Beat, and we cover music, art, entertainment and all things culture. The site is also a creative outlet for writers, photogs and anybody else who wants to contribute.

I feel this town is a powder keg of talent that for some reason has not been tapped or utilized correctly. I want to give people a chance, put their name out there and inspire them to do something great. If it weren’t for somebody giving me a chance, you wouldn’t be reading this."