The El Paso Transnational Trolley Project will be live on The Lisa D Show Nov. 15 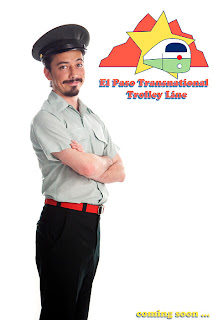 FOR IMMEDIATE RELEASE
EL PASO, TX—(November 8, 2010) If you've come across the mysterious black and white poster images of the trolley driver with a hat dotting various parts of downtown El Paso, then you've probably seen the work of visual artist Peter Svarzbein! The poster series titled “The El Paso Transnational Trolley Project” is a visual art campaign for a make believe transit system aimed at raising awareness of what one vision of the future could be, says Svarzbein, if commuters from El Paso and Juarez felt safe again commuting to and from both cities via a transnational trolley system. With slogans like “Here to Make The Border Safe Again” and “Let Us Take You Home On Either Side of The Border,” the objective of the project is to evoke curiosity, and stir hope for some normalcy in the border region from the surge of violence and uncertainty that has plagued El Paso’s sister-city, Juarez.

“Although I have lived in New York City for the last 6 years, I was born and raised in El Paso and have many fond memories of the area which raised me,” said Svarzbein. “My use of fictional constructions is the belief that more traditional projects exploring the border have become cliché and easy to dismiss. The viewer is likely to have become desensitized to scenes showing violence, sadness or fear to describe the border area. My project is not about the realism of actually building a trolley right now between two cities. My project is about the realism and importance in imagining, where real power comes from perceived power. The El Paso Transnational Trolley is a metaphor for a positive and hopeful future between the two cities, united.”

The uniquely-compelling art series is the first of its kind in El Paso and combines public art and performance art. “My ultimate goal is to encourage a positive attitude towards border-crossing past, present, and future. If it brings more awareness and want for a mass transit fixed-rail system in El Paso, and, hopefully Juarez then that's great.”

The artist will be at Sunland Park Mall to introduce the trolley conductor in a performance art event in front of the Greenery at Sears from 1-3 p.m. on Saturday, Nov. 27th. And, on Sunday, Nov 28th the artist will provide a media photo opportunity as he officially puts up his series posters across from 111 S. Mesa; 1-4 p.m.
Posted by The Lisa D Show at 4:19 PM