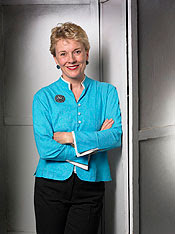 Adair Margo was the Chairman of the President’s Committee on the Arts and the Humanities during the two-term Presidency of George W. Bush. During her tenure, Margo focused on international cultural diplomacy beginning with Mexico. She traveled with First Lady Laura Bush to Paris, France for the United States reentry into UNESCO in 2003 and was appointed by Secretary of State Colin Powell to the US National Commission for UNESCO. Serving as a cultural ambassador, Margo traveled to Uruguay in 2004 at the invitation of U.S. Ambassador Martin Silverstein and she led the highest level cultural delegation to ever visit the People’s Republic of China at the invitation of Minister of Culture Sun Jiazheng in 2006. Adair Margo received the Aguila Azteca, the highest recognition given by the Mexican Government to a non-Mexican citizen, from Ambassador Arturo Sarukhan at the Mexican Cultural Institute in Washington, DC in 2007. In 2008, she received the Presidential Citizens Medal from President George W. Bush who cited her “rallying of support for the cultural agencies and strengthening of international relationships from Mexico to China”.

Visit http://www.adairmargo.com for more info.
Posted by The Lisa D Show at 7:06 AM