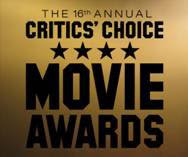 (Los Angeles, CA – December 13, 2010) – The Broadcast Film Critics Association (BFCA) has announced the nominees for the 16th annual Critics’ Choice Movie Awards. The winners will be announced at the Critics’ Choice Movie Awards ceremony on Friday, January 14, 2011 at 9:00 PM ET/PT. This year’s event will again take place at the Hollywood Palladium. This is the fourth year in a row that VH1 will broadcast the gala live on the network and the first year the show will also be broadcast internationally.

Amy Adams will be seeking her second Critics’ Choice Award as a Best Supporting Actress nominee in “The Fighter.” Adams previously won the category for “Junebug” and has received three other nods from the BFCA, including one for Best Actress in “Enchanted.”

The 250 members of the BFCA, the largest film critics’ organization in the United States and Canada, representing television, radio and online critics, selected nominees in each of 25 categories. The awards are bestowed annually to honor the finest in cinematic achievement. Eligible films were released in 2010. The accounting firm of Gregory A. Mogab tallied the written ballots.

Historically, the Critics’ Choice Movie Awards are the most accurate predictor of the Academy Award nominations. All four major acting category winners at the Academy Awards in 2010 were first Critics’ Choice Movie Awards winners in the same categories and were present at the January 15, 2010 ceremony to graciously give their first acceptance speeches of the awards season. The BFCA also recognized “The Hurt Locker” for Best Picture and Kathryn Bigelow as Best Director, making her the first female to win the award. “The Hurt Locker” and Bigelow also went on to win the Academy Award for Best Picture and Best Director, but were both overlooked at the Golden Globes.

Today, VH1 also announces the launch of its Critics’Choice Movie Awards site at CriticsChoice.VH1.com. The site offers movie fans detailed information about the show and this year’s nominees, VH1.com’s Award Season Twitter Tracker, where users can see the awards show buzz that’s happening on Twitter in real time, and Quick Critic, an opportunity to share short film reviews for a prize that includes a trip for two to next year’s Critics’ Choice Movie Awards. Additionally, interviews with many of the acting nominees can be found on the BFCA's site CriticsChoice.com.

***
Tune in this Friday for Movies with Felipa at noon on KHRO 1150 AM. Felipa will discuss the Critics’ Choice Movie Awards and more.
Posted by The Lisa D Show at 8:04 AM