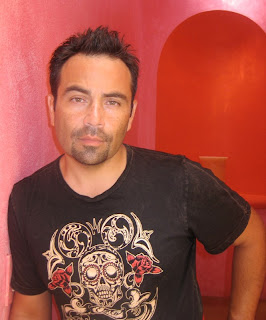 Robert Holguin used to be a reporter at the El Paso Times, focusing on arts and culture, and eventually becoming the assistant editor of the 'Living' section. In 2000, Holguin started as a reporter at KVIA, before becoming the weekend anchor, and then eventually co-hosting "Good Morning El Paso" as the fourth “Robert” to host. Holuguin left El Paso in 2006. These days he's a reporter and fill-in anchor at the ABC affiliate in Los Angeles. Holguin continues to stay very involved film and music.

From the band website: Can you call it a "supergroup" when none of the members are famous? Perhaps only if the players are able to smash the dogmas of pop music by coming together on a project that re-invents the conventions of a traditional band.

Such is the case with the New Plastic Machine, which manages to synchronize several personalities and styles into one album of original music. The eight songs on the group’s debut EP embody the New Plastic Machine aesthetic, an injection-molded creation that glides effortlessly from R&B-infused pop to guitar-heavy modern rock, with influences that include everyone from David Bowie to Wilco to Tracy Chapman and even The Killers.

www.thenewplasticmachine.com
Posted by The Lisa D Show at 6:08 AM