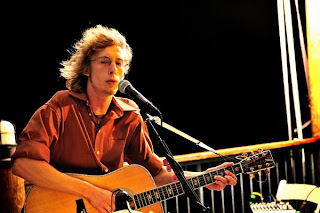 Today on "The Lisa D Show" at noon on KHRO 1150 AM we will talk to musician Dylan Charles. Charles is performing this week in El Paso at several venues, tonight he'll be at Cincinnati Bar & Grill at 10pm.

On tour from Bisbee, AZ, Charles has played in Silver City and El Paso and after this weekend is heading to Austin, San Angelo, San MArcos, Cincinnati, Ann Arbor and New York City among other places along the way. He is promoting a new record "Time For Breakfast" recorded in Tucson, AZ at Wavelab Studios with Producer Craig Schumacher (Calexico, Devotchka, Neko Case).

For more info on the album and my Charles' bio visit www.dylancharles.com.
Posted by The Lisa D Show at 6:22 AM