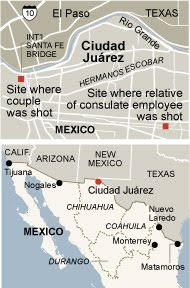 Today on "The Lisa D Show" at the top of the hour we'll discuss headlines of the week and what's to come. Namely will discuss the New York Times and NPR coverage of the American consulate slayings this past weekend in Ciudad Juárez. From the New York Times, "Gunmen believed to be linked to drug traffickers shot a pregnant American consulate worker and her husband to death in the violence-racked border town of Ciudad Juárez over the weekend, leaving their baby wailing in the back seat of their car, the authorities said Sunday. The gunmen also killed the husband of another consular employee and wounded his two young children."

Later in the show we'll meet a robotics teams from Da Vinci School for Science. The Arts Robotics Team will be traveling to Dallas to the annual FIRST Robotics competition and is taking this opportunity to increase awareness of robotics and engineering in the community. We will talk with some of the members about FIRST Robotics as a life-changing experiences, and one not many people have heard of

Also, be sure to follow this blog to see news and information about upcoming guests. Email me with ideas for guests or just to say "hi" at thelisadshow@gmail.com.
Posted by The Lisa D Show at 6:44 AM