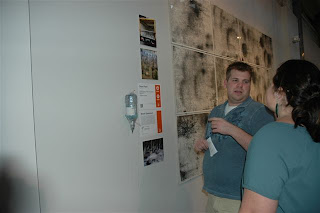 Below is a paragraph from a longer piece by Joseph Becherer in the Grand Rapids Press on works from the UICA in ArtPrize. Reading through the piece gives you a good idea of the tone UICA set for this year’s ArtPrize in the level of work on display at both its facilities.

“Neighboring is a drawing/performance piece, “Truck Drawing: El Paso Texas to Grand Rapids, Michigan” by Texas-based artist Dave Ford. The work is composed of rows of handsome, yet ghostly abstract drawings in which dark centers swirl out into the oceans of white paper. From a distance, the resemblance to minor gun powder explosions could be inferred. However, as neighboring didactics explain, the work was realized by rows of water bottles with graphite tips suspended upside down like pendulums in a moving truck. The dynamics of water, weight and movement allow for the drawn images owing to human conception, but absent the human hand. This strange duality in mark making and object creation gets to the very heart of the conceptual art. But outside of planning is the artist’s openness to the laws of chance. The bonus is that the work is most handsome and serene.”

Joseph Becherer is chief curator and vice president for collections and exhibitions at Frederik Meijer Gardens & Sculpture Park and a professor of art history at Aquinas College. He also was on the curatorial team for the ArtPrize exhibition center at Meijer Gardens and as well as Calder Plaza and the Gillette Bridge. This continues a series of columns that offer his views on various art topics throughout ArtPrize 2010.

An avid collector of handwritten grocery lists, Dave Ford graduated from Grand Valley State University with a BFA in 1993. Afterward, in typical American folklore fashion, Mr. Ford moved to the art dormitory of the eastern U.S., also known as Williamsburg, Brooklyn. There he continued making art, participated in group shows and began creating his “Truck Drawings.” The drawings, which document the truck’s movement with dozens of pencils, proved to be fruitful and were featured in the sixth edition of Dave Eggers', McSweeneys in 2000. This attention generated several commissioned drawings and with the artist’s subsequent move to El Paso, Texas, long distant drawings to Connecticut and San Francisco became logistically possible. The opportunity to do a live drawing from the El Paso-Juarez Border to Grand Rapids for the Artprize event has re-invigorated the truck idea. Dave Ford is currently creating works addressing the Border wall and utilizing the weight of an egg to suspend itself. For more information visit www.fordart.com.
Posted by The Lisa D Show at 7:34 AM