Hanoi Jane's getting peed on

This sticker is on the men's bathroom urinal at the War Eagles Airplane Museum in Santa Teresa, New Mexico. They also sell them in the gift store. 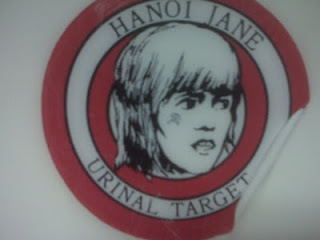 Wikipedia
"Hanoi Jane"
Jane Fonda on the NVA anti-aircraft gun
Fonda visited Hanoi in July 1972. Among other statements, she repeated the North Vietnamese claim that the United States had been deliberately targeting the dike system along the Red River stating that “I believe in my heart, profoundly, that the dikes are being bombed on purpose”. Columnist Joseph Kraft, who was also touring North Vietnam, believed that the damage to the dikes was incidental and was being used as propaganda by Hanoi, and that if the U.S. Air Force were "truly going after the dikes, it would do so in a methodical, not a harum-scarum way."[19]
In North Vietnam, Fonda was photographed seated on an anti-aircraft battery.[20] In her 2005 autobiography, she writes that she was manipulated into sitting on the battery. Later she claimed to have been horrified at the implications of the pictures and stated that she regretted the pictures. During her trip Fonda also made ten propagandistic radio broadcasts in which she denounced American political and military leaders as "war criminals". Fonda has defended her decision to travel to North Vietnam and has defended her radio broadcasts. [21] [22]
During this visit she also visited American prisoners of war (POWs), and brought back messages from them to their families. When cases of torture began to emerge among POWs returning to the United States, Fonda called the returning POWs "hypocrites and liars." She added, "These were not men who had been tortured. These were not men who had been starved. These were not men who had been brainwashed."[23] On the subject of torture in general, Fonda told The New York Times in 1973, "I'm quite sure that there were incidents of torture... but the pilots who were saying it was the policy of the Vietnamese and that it was systematic, I believe that's a lie."[24]
The POW camp visits also led to persistent stories—decades later circulated widely on the Internet and via email—that the POWs she met had spat on her, or attempted to sneak notes to her which she had then reported to the North Vietnamese, leading to further abuse. However, interviews with two of the alleged victims specifically named in the emails, found these allegations to be false as they had never met Fonda.[25]
In 1972, Fonda helped fund and organize the Indochina Peace Campaign.[26] It continued to mobilize antiwar activists across the nation after the 1973 Paris Peace Agreement, through 1975, when the United States withdrew from Vietnam.[27]
Posted by The Lisa D Show at 4:14 PM