Book News: This Thing Called the Future by J.L. Powers 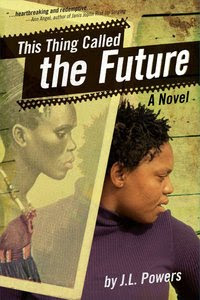 Back to the Future

A drumbeat wakes me. Ba-Boom. Ba-Boom. It is beating a funeral dirge.

This is not your mama's coming-of-age story. In a South African shantytown, 14-year-old Khosi struggles with poverty, disease and oh, there's a boy at school she has a huge crush on. This Thing Called the Future, the latest from Fulbright scholar J.L. Powers, pulls you right into Khosi's confusing, magical world, where ancient tradition collides with modern problems. Where the teenage anticipation of a first kiss or going away to college is marred by the deadly threat of AIDS. The threat hangs in the air, thick like an approaching storm, like thunder just in the distance. Ba-Boom. Ba-Boom. Ba-Boom.

"A great achievement by J.L. Powers."—Deborah Ellis, The Breadwinner

This Thing Called the Future isn't due out until this spring, but we've got the first five chapters for you to read now! Learn more about Khosi, magical sangomas, mothers who must stay away in order to nurture their children and yes, that cute boy at school we mentioned. The sample chapters are available now on our website here, or you can click on the link below to access the sneak peak.

For more on This Thing Called the Future click here.

An alum of the Cinco Puntos offices, J.L. Powers is an historian on Africa and now owns her own independent publishing house. Click here to visit her author page and learn more.

Click here to read the beginning of This Thing Called the Future
Posted by The Lisa D Show at 11:42 AM