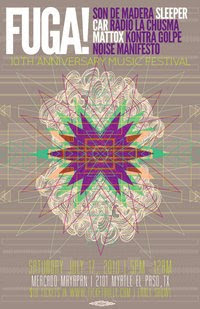 Today's edition of "The Lisa D Show" at noon on KHRO 1150 AM will be guest hosted by Marina Monsisvais. You'll recognize Marina from her days as one of El Paso's most loved DJs when Hero 94.7 was playing modern/awesome music. On today's show, Marina will be talk to several local bands participating in this Saturday's 10th Anniversary Concert for FUGA at Cafe Mayapan. Show starts at 5 p.m., $10 at the door.