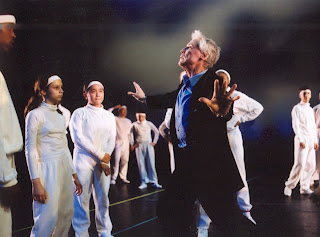 Today on the Lisa D Show at noon we're talking to Jacques D'Amboise, the creator of Kids Excel. Kids Excel El Paso (KEEP) Annual End of Year Event "Reading Rock Stars", takes place tonight at the Plaza Theater. Seating begins at 6:30 with performance scheduled to begin at 6:45. There will also be a Pre-show Party at the El Paso Museum of Art beginning at 5:00 pm. Press release and invitation attached.

Jacques d’Amboise (Founder, choreographer) is recognized as one of the finest classical dancers of our time, Jacques d’Amboise now leads the field of arts education with a model program that exposes thousands of school children to the magic and discipline of dance. In 1976, while still a principal dancer with New York City Ballet, Mr. d’Amboise founded National Dance Institute in the belief that the arts have a unique power to engage and motivate individuals towards excellence.

In 1983, Mr. d’Amboise co-authored Teaching the Magic of Dance with Hope Cooke, featuring photographs by Carolyn George. Mr. d’Amboise is currently at work on a memoir to be published by Alfred A. Knopf. His wife, the late Carolyn George, was a dancer, teacher, choreographer, and photographer. Together, they had four children—George, Christopher, and twin daughters Charlotte and Catherine.

Mr. d’Amboise’s work in dance education has taken him all over the world—from the extremes of Yakutsk, Siberia, to the Danakil Desert in Ethiopia, from 13,000 feet below sea level at the Dead Sea to the mountains of Nepal, and from the dryness of the Atacama Desert in Chile to rainforests on the island of Kauai in the Hawaiian Chain. Over the last 30 years, NDI programs in New York City and its associates, both nationally and internationally, have reached and influenced over 2 million children.
Posted by The Lisa D Show at 6:07 AM