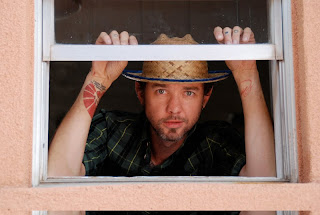 “Ward is the lead singer of Sleepercar—the West Texas band from El Paso, made up of a revolving cast of characters with one common thread—the love of the American singer/songwriter and the desire to contribute to that legacy.
What was to become Sleepercar began as At the Drive In, which Ward was a founding member, was winding down and then sidetracked as Sparta, for whom Ward would serve as lead vocalist and guitarist, began. All along, Ward kept writing songs, jammed here and there, tracked material, recorded and released solo EPs, all the while, keeping the Sleepercar dream alive.
Through Ward’s winding road, Sleepercar has had many triumphs-- touring the United States and Canada with bands such as Coldplay, Old 97’s, City and Colour, playing shows with Conor Oberst and the Mystic Valley Band in his hometown of El Paso and the southwest region, then taking some time to open a bar in El Paso called Hope and Anchor with two business partners, an idea not just meant to serve as additional income, but an idea in a way, “to make sure the guys [in the band] had some place to work when we’re not on the road,” said Ward.

Ward’s growth doesn’t stop there—he and “right hand man” Gabe Gonzalez are currently working on building a state of the art recording studio in the heart of El Paso. “The idea is to have a home base where we can comfortably work on our music, from soundtracks to Sleepercar records, and produce and record other artists,” said Ward. In theory, bands can come to El Paso, have a stiff drink and go record—all in a day’s work around here.

Other highlights include recording a song with Tegan Quin for one of his solo EPs, “In the Valley, On the Shores,” sharing the stage with good friends Chuck Ragan, Frank Turner, Tim Berry, etc during the Revival Tour in 2009, serving as the Music Supervisor and scoring the soundtrack for indie film, Motel Glimpse in 2009, establishing www.tembloroso.com, an online store for him to distribute his music, designing a sneaker for Pony and finally tiling his bathroom floor.”

For more information about Sleepercar, visit www.sleepercarmusic.com.   Photograph above taken by Marina Monsisvais
***
If you're interested in being a guest on "The Lisa D Show" send an email to thelisadshow@gmail.com.
Posted by The Lisa D Show at 6:18 AM