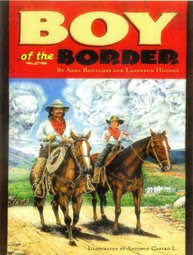 From an article published on www.epmediagroup.com:

The path to publish Boy of the Border, a coming-of-age tale about a 12-year-old boy in the Mexican Revolution-era Southwest, began when Maceo read a passage from Arna Bontemps-Langston Hughes Letters, 1925-1967. Bontemps mentioned to the fellow acclaimed writer and friend, “I had almost forgotten Boy of the Border, but I recall now that I liked it while we were doing [it], and I can’t imagine why it was not published.”

The title Boy of the Border stood out to the UTEP director of African American Studies and history professor. He and Sondra traveled twice to Yale University’s Beinecke Rare Book and Manuscript Library. They found the original written from 1939-1941, and the 1955 revised edition, which is what was published by the Benfield’s publishing company Sweet Earth Flying Press.

The process from finding the manuscript in 2006 to publishing the book in late 2009 was not a simple one, according to Sondra, who works as the publisher (her husband works as the editor as well as at UTEP). The publishing team located a literary agent who represents the Bontemps and Hughes estates, and they were greeted with some skepticism. “Because we did not have experience as publishers, you can imagine the literary agent saying ‘This is a Langston Hughes book; do you know what you’re doing?’” said Sondra.

After 18 months, the project was finally underway, and the illustrations by father-son team Antonio Castro L. and Antonio Castro H. made the project complete. “They did a wonderful job of researching the project so that the dress and architecture were appropriate to the locations,” said Sondra. After completing the project, they entered and won a contest among small new publishers in which the grand prize was a contract for distribution signed in January 2009.

The former elementary school counselor and textbook author said that the publishing company is on the path to publish two more books, one a Kenyan woman’s self help book and the other a Hungarian holocaust survival story. Though one of their first major projects was to unearth Boy of the Border, a story that is almost 70 years old, Sondra said the company will offer new authors a chance for their stories to be told in ways that larger companies might not allow. She said: “One of the things we pride ourselves on is that we give [the writers] the agency to say what they mean to say.”

For more about this publisher, visit their website at www.sweetearthflyingpress.com.

***
If you're interested in being a guest on "The Lisa D Show" send an email to thelisadshow@gmail.com.
Posted by The Lisa D Show at 5:49 AM